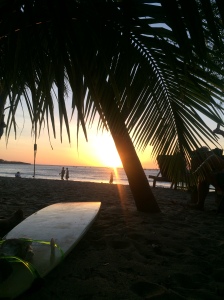 It was a short trip, benefit of traveling constantly for work – flying on miles can justify ashort trip to Central America for a friend’s wedding.  I feel as if I dipped my toe in the water, just enough to know, I want to come back here.  We stayed at an all inclusive for the wedding, which to me is like a vacation prison but I understand the appeal for a wedding and for families. Although I did manage to meet the one single guy at the resort, a United Pilot, named Craig, super cute but lives in New Jersey.  Craig, call me, let’s get fish tacos next time you fly to San Diego.

Luckily, I had my birthday twinsie, Stacey, there and we took a day to explore. Stacey is a gypsy at heart as well and I love her. I came home and when people asked about the trip, I described it as my neighborhood, Pacific Beach on steroids. The people were friendly and chill, the food was awesome, the beaches lovely and the culture was a total surf town.  However, day we had to surf was not very good, in fact, the winds were so strong that my surfboard blew out of the water after I jumped off it and I had to catch it in the air to keep from knocking myself out.  It was intense but we had so much fun. First of all, we surfed in bikinis, that does not happen in San Diego, the waters are just too cold. Also, we made friends with a guy from Boston, Nick, and I learned you can surf in Boston – MIND BLOWN.  Will have to find that spot.

After being offered a sunset ride on a pony by not one local but two, we found a little place in Tamarindo called The El Bee and had sunset drinks.  Oh and also, just to be clear, there were TWO locals on ONE pony.  I laughed heartily and then instantly felt awful for the pony who looked miserable with two drunk dudes riding on her back trying to pick up women. The El Bee is a fantastic place with great drinks, hammocks, swings, bean bags, live music and it’s all right there on the beach. I never wanted to leave. 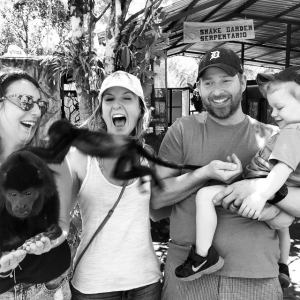 We’re not actually a family…

I didn’t think I would want to go play with monkeys at one of the local Canopy’s but everyone said it was amazing and I had to do it. I mean I do love monkeys, slightly terrified of them but not one to miss out on something I tagged along.  Although when he offered to hold the snakes, I not only declined I went to the other end of the farm.  He had just brought two back from the woods that had ESCAPED.  He dropped them back through holes into their cages. I kept thinking this system is not very secure. I hate snakes. I hate snakes more than Samuel Jackson.  Actually, I still blame Harrison Ford for my fear of snakes.  Why did they have to have that snake pit scene.  I mean how many times did I wake up in the middle of the night only to step down into that pit.

Totally off track…what did I learn in Costa Rica? Well I knew when I headed down there that I was already planning on going in August for another Surf Camp.  But being there in vacation prison reminded me that I don’t want my vacations scripted, or an agenda or schedule or whatever you want to call it.  I want to be free, to explore, to learn what the locals do or eat and see it all. I want to really experience the place that I am in.  So Costa Rica I will be back, but it will be on my terms, so I can experience as you say, the pure vida.